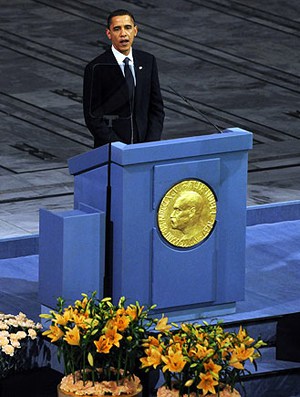 It can’t be ignored that a man who just ordered 30,000 more men and women into a war accepted the Noble Peace Prize this morning. Obama gave an appropriately humble acceptance speech. He talked about moving from war to peace. He even noted the fact that he had expanded a war.

And that phrase alone should give us pause: A war. Not: The war.

On the occasion of his acceptance of the Nobel Peace Prize 45 years ago, Dr. Martin Luther King had a far different message:

After contemplation, I conclude that this award which I receive on behalf of that movement is a profound recognition that nonviolence is the answer to the crucial political and moral question of our time – the need for man to overcome oppression and violence without resorting to violence and oppression. Civilization and violence are antithetical concepts.

“Civilization and violence are antithetical concepts.”

Some years later King said it even more clearly. One year prior to his assassination King said at Riverside Church in New York City: 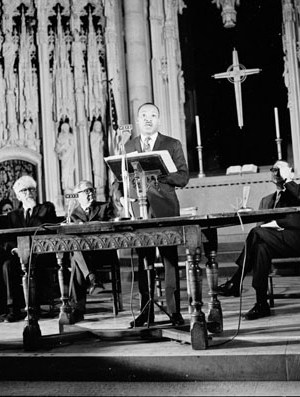 A true revolution of values will soon look uneasily on the glaring contrast of poverty and wealth. With righteous indignation, it will look across the seas and see individual capitalists of the West investing huge sums of money in Asia, Africa and South America, only to take the profits out with no concern for the social betterment of the countries, and say: ‘This is not just.’ The Western arrogance of feeling that it has everything to teach others and nothing to learn from them is not just. A true revolution of values will lay hands on the world order and say of war: ‘This way of settling differences is not just.’ This business of burning human beings with napalm, of filling our nation’s homes with orphans and widows, of injecting poisonous drugs of hate into the veins of peoples normally humane, of sending men home from dark and bloody battlefields physically handicapped and psychologically deranged, cannot be reconciled with wisdom, justice and love.

One of the tragedies of the life of Dr. Martin Luther King is that his hope for a true revolution of values never happened and so we watch the Nobel Peace Prize go to a man who, for what he believes are good reasons, expands war, looking for the elusive peace.

But we know that peace—real peace—will not come from war. The “winning” of the war, will only drive it underground for a while.

There is no revolution.