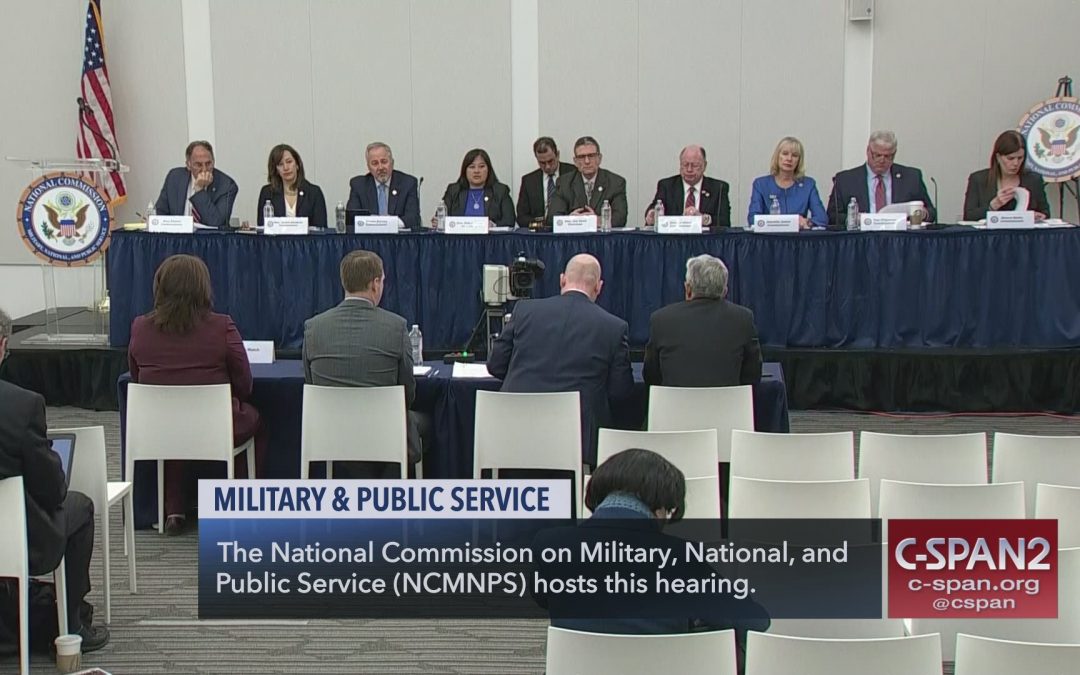 The National Commission on Military, National, and Public Service is at work right now to determine the fate of Selective Service (Draft) Registration, and they need to hear from people of conscience!

Congress established the National Commission on Military, National, and Public Service as part of the compromise reached by the Conference Committee during the 2017 NDAA (National Defense Authorization Act) process.

The Commission’s mandate is to consider issues of national service, both military and civilian, including important questions about Selective Service registration: should it continue, should women be required to register, and are there changes that should be made to the Selective Service System, such as those CCW has long advocated for, which would protect the rights of conscientious objectors.

It has been decades since there has been a serious national conversation about Selective Service. This is a great opportunity to lift our voices to call for an end to Selective Service (draft) Registration. All branches of our government have affirmed that the primary purpose of Registration is to be prepared for war. This is a violation of conscience for many people of different faiths and beliefs. There is currently no option to register as a Conscientious Objector; as a result, individuals who cannot participate are punished for life, without due process.

If the Commission fails to end Registration, they must allow people to register as conscientious objectors and restore full rights to people of conscience.

The Commission is scheduled to report its findings to Congress in 2020 and spent much of 2018 hosting public meetings across the country. The Commission released its interim report on January 23, 2019. They held formal hearings during the first half of 2019 to take official public comment on the interim report.

Below are some talking points that you can use in your comments. Also, here is a more detailed discussion of the problems with draft registration and why it should be abolished.

Thank you very much!

1) Draft registration has been a failure and a burden on millions of men. Rather than continue this burden on men, or extend the burden to women, it’s time to end it now.

Gil Coronado, the former director of Selective Service said in the 1999 annual report,

“If we are not successful in reminding men in the inner cities about their registration obligation, especially minority and immigrant men, they will miss out on opportunities to achieve the American dream. They will lose eligibility for college loans and grants, government jobs, job training and for registration-age immigrants, citizenship. Unless we are successful in achieving high registration compliance, America may be on the verge of creating a permanent underclass.”[i]

That was 18 years ago, and today there are even more restrictions and penalties for men who haven’t registered. In many states, registration is linked with access to driver’s licenses and state ID’s, threatening access to the ballot box for people of conscience.

If a man fails to register, for whatever reason, many of these penalties stay with him for the rest of his life, even though he will never have been charged, tried or convicted of any crime! This is not only unconstitutional, it’s antithetical to the values we hold dear in our democratic society.

Rather than continue this extra-judicial punishment for men or extend it to women, it’s time to end it for all!

2) Selective Service registration is a failure. When given a choice, most men don’t register.

·       SSS reports only 88% compliance with registration.[ii] That means millions of men are permanently burdened and punished by failing to register.

·       66% of those who registered did so by coercion, not will, as the law instructs, either to get financial aid for college or to get a driver’s license .[iv]

4) Draft registration is unnecessary. After 9-11, the military had more than enough volunteers.[vi] Activating the draft was never seriously considered.

Alternatives to this burdensome system currently exist. In the unlikely event of a “sudden need” for more military personnel, it is reasonable to assume that, with today’s technology, a pool of names could be generated quickly and easily for a potential draft (and more cheaply than the current ongoing registration).

5) If the Commission finds that registration has value and should continue, they must require Selective Service to provide a pathway for people to register as conscientious objectors, and restore full rights to all people of conscience by overturning lifetime punishments. Doing so would enable people of conscience to be both in compliance with the law and true to their conscience.

6) Though failure to register is a felony, the government has not prosecuted anyone since 1986. Almost all of those who were prosecuted were conscientious objectors who publicly asserted their non-compliance as a religious, moral, or political statement. As a result of this public witness, non-compliance with registration actually increased. By allowing people to register as conscientious objectors, the government may come closer to reaching its goal of increased compliance.

[i] FY 1999 Annual Report to the Congress of the United States, from the Director of Selective Service, p.8.

[ii] FY 2015 Annual report to the Congress of the United States from the Director of Selective Service, p. 5