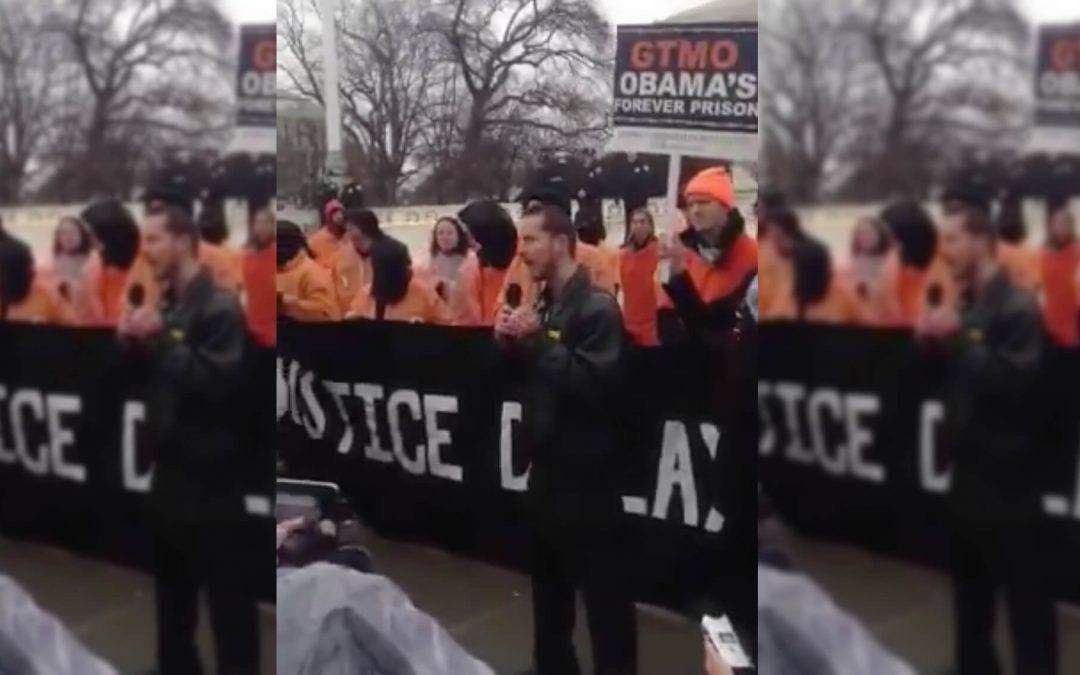 What do we want? Human Rights! When do we want them? Now!

Wednesday, January 11, 2012 was a rainy, cold day in Washington DC.  It was the kind of day you did not leave the warmth of your home unless you had to, unless there was something really important to do.

It just so happened that there was something very important to do in Washington DC on Wednesday.  There was a rally against Guantanamo Bay, torture, and indefinite detention.

The rally marked the tenth anniversary of the first detainees arriving in Guantanamo Bay.  The rally started at Lafayette Park by the While House.

There were speeches by people who are extensively involved in the fight to close “Gitmo.”

Many of the speakers are lawyers currently representing detainees held in the prison.  In the last ten years there have been almost 800 detainees housed at Gitmo; there are 171 detainees there now.

Only six detainees have been in court and 89 have actually been cleared for release but are still in prison because of US legislation.  Throughout the crowd, and in front of the stage area, were people dressed in orange jump suits, many of them wearing black bags over their heads.  These people represented the detainees imprisoned at Guantanamo.  Many of these people had signs with names and stories of detainees on their backs.  Almost everyone in the crowd had a sign that read something along the lines of “Close Gitmo NOW!”  After the speeches were over the “detainees” led the crowd through downtown DC to the Supreme Court building. Some of the crowd was led to Freedom Plaza (Occupy DC) and then back to the White House.  As the crowd marched they chanted: “What do we want? Human Rights! When do we Want them? NOW!” “We are unstoppable, human rights are possible,” “Hey, hey, ho, ho Guantanamo has got to go!”.

When the crowd got to the Supreme Court there were more speeches.  One of the speakers was Daniel Lakemacher.  Daniel is ex-Navy and was stationed in Guantanamo Bay until the events he witnessed there moved him to begin the conscientious objector process. Daniel was granted CO status.

CCW helped Daniel as he applied for CO status and, after he was honorably discharged as a CO, he worked at CCW.  The speech Daniel delivered on the steps of the Supreme Court  added a level of realism to the day that would have been missing otherwise.

Thank you for your support of COs like Daniel and for all you do for a more peaceful and just world.